In Inletkeepers’ blog series, ‘The Corporate War on Salmon’, our Advocacy Director, Bob Shavelson, examined the campaign disclosure of so-called ‘Stand For Alaska’ to reveal that this supposed ‘broad statewide coalition’ is backed by an elite who’s who of corporate special interest in our state. 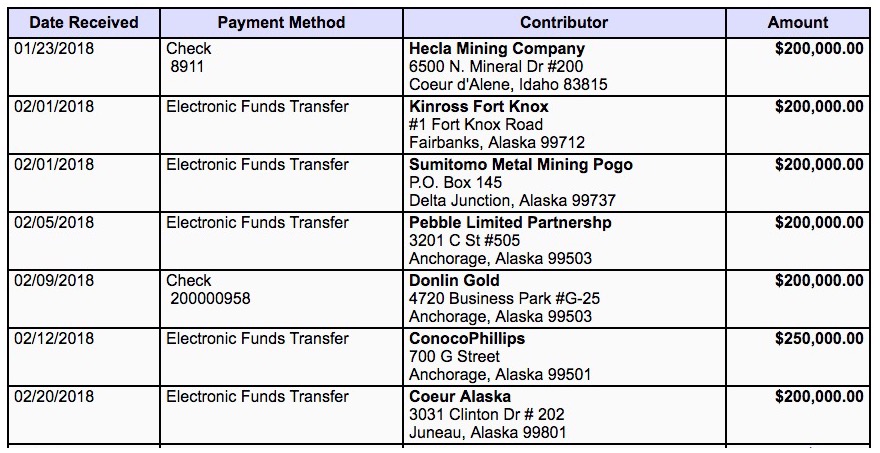 As you can see in the records, over 80% of the contributions to Stand for Alaska come from only 8 different corporations. The ‘Awful 8’ are all oil, mining or gas conglomerates, with boards of directors that are rich from extracting resources around the globe. Each of these free-ranging conglomerates benefits from the least amount of environmental oversight possible. These companies like it when they don’t have to clean up their own mess – like oil spills, tailing ponds, toxic rivers. We see, time and time again, that it is far cheaper for the awful eight to donate money to Stand for Alaska than to pay for even a fraction of their impacts to clean water or towards any solutions real Alaskans are calling for.

We are talking about $500,000 from British Petroleum, who in 2006 spilled a quarter million gallons of crude into Prudhoe Bay and killed 11 oil workers in the Deepwater Horizon oil spill. We are talking about $200,000 from Hecla Mining, who were fined $260 million to clean up their mess in Coeur D’alene, Idaho (3). The same Hecla Mining that United Steel Workers Local 5114 has been striking against for more than a year. (4) And $200,000 from the same Pebble Limited Partnership that wants to destroy Bristol Bay, that you and I have been fighting for years to protect. (5). Each of the ‘Awful 8’ companies has a more economically destructive and ecologically disastrous record than the last.

Really, Stand for Alaska should just be called Step on Alaska. All of these companies profit from destroying the Alaskan landbase. What they stand for is looting of Alaska’s natural resources, destruction of ecosystems and making a few rich people richer.

Stand For Alaska is campaigning against the Stand for Salmon initiative, claiming it poses an existential threat to Alaskans way of life. They say that the current regulations and with their business-as-usual approach everything is going fine in Alaska. Well, we live here and we know the system that regulates the Awful 8 is broken. Salmon fisheries are facing closures across the state and our oceans waters are warming. Business as usual is a crisis for our wild salmon. If anything, it’s the conglomerates behind Stand For Alaska that represent an existential threat to Alaskans.

The Stand for Salmon initiative will safeguard the species and ecosystems that we rely on. It is a simple update, and a clear step forward to protect salmon habitat in Alaska. We need this legislation and we know that you think so too. Join us and TAKE THE PLEDGE to STAND FOR SALMON!